Blur to get outstanding contribution award at Brits... 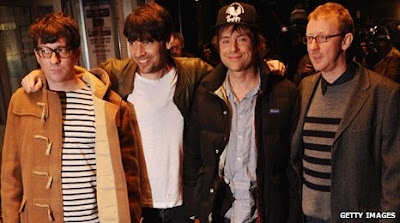 Blur to get outstanding contribution award at Brits

lur are set to be honoured at next year's Brit Awards for their outstanding contribution to music.

It comes 21 years after their debut and 17 years since they won four Brits off the back of their Parklife album.

"It's great to have recognition for all the work and all the heartache and all the joy that's gone into this band," said frontman Damon Albarn.

The four-piece briefly reformed in summer 2009 but chose to disband after a series of high profile outdoor shows.

Blur will receive the award at the Brits ceremony in February, held at London's 02 arena.

There has so far been no comment on whether the band will perform on the night.

Guitarist Graham Coxon said the band had not changed over the years.

"Being in a band this long is like a kind of time travel," he said.

"We're the same gang we ever were, we've just landed in a different era.

"But it's always nice to get a Brit Award," added Coxon.

The band's only previous success at the awards was in 1995 when - at the height of the Britpop boom - they picked up best album, best single, best video and best group.

This year's Brit Awards statue has been designed by Sir Peter Blake. The artist is also known for his collage cover for The Beatles' Sgt Pepper's Lonely Hearts Club Band album.

Blur reformed for a series of performances in 2009, including two shows at Hyde Park in London and a headline slot at Glastonbury.

Despite rumours of new recordings, the band called a halt to the reunion at the end of the summer.

The full list of Brit Awards nominations is due to be announced on 12 January at London's Savoy Hotel.