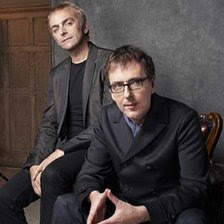 London 2012: Olympic ceremony role for Underworld duo
Underworld have been appointed music directors for the opening ceremony of the London 2012 Olympics, organisers have announced.

Rick Smith and Karl Hyde will work with artistic director Danny Boyle and will be responsible for overseeing the music in the three-hour ceremony on 27 July.

Underworld's collaborations with Boyle extend from his 1996 film Trainspotting to his recent staging of Frankenstein.

Boyle described the duo's appointment as "the final piece of the jigsaw".

"It's a great honour to be asked to do this and one we're taking very seriously," said Hyde.

"It's certainly not something we'll get the chance to do again."

More than 10,000 people have auditioned to take part in the opening and closing ceremonies for the 2012 Olympic and Paralympic Games.

Earlier this week the government doubled the budget for the Olympic and Paralympic ceremonies to more than £80m.

Earlier this year, Karl Hyde spoke to BBC 6 Music about Underworld's working relationship with Boyle ahead of Frankenstein's opening at the National Theatre in London.

"What's interesting about working with them is how much broader their taste is than you might imagine," said Boyle this week.

"With Frankenstein we really saw how far we could take a broader approach than we'd used together on the films."

The duo - described by Olympics organisers as "British electronic music pioneers" - went on to provide music for his films A Life Less Ordinary, The Beach and Sunshine.