David Bowie 'lost' footage to be broadcast on TV... 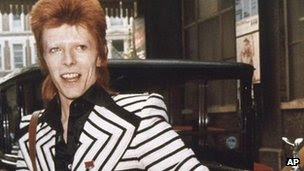 A rare David Bowie Top of the Pops performance will be shown on television for the first time since it was originally broadcast in 1973.

It was believed that every recording of the singer's performing number two hit "The Jean Genie" had been destroyed.

It emerged last week that one had been found - and it will feature in a Top of The Pops Christmas Special on BBC 2.

The footage was found when retired TV cameraman John Henshall realised he had his own copy of the performance.

The film emerged earlier this month when it was shown at the Missing Believed Wiped event at the British Film Institute in London which celebrates the discovery of long-lost TV shows.

Mr Henshall, from Oxfordshire, worked on the show and kept a copy of Bowie's appearance.

The four-minute clip of Bowie performing alongside his then-band The Spiders From Mars will be screened in full on the Top of The Pops special.

The performance has not been screened on TV since it originally aired on 4 January 1973, the day after it was recorded.

It was lost when hundreds of shows were wiped to allow video tape to be reused by the BBC, because of its high cost.

Mr Henshall was unaware until recently that the BBC had not kept a copy.

"I just couldn't believe that I was the only one with it. I just thought you wouldn't be mad enough to wipe a tape like that," he said earlier this month.

"I can't imagine what other piece of TOTP from the early Seventies would be as extraordinary a find."

BBC Two's 90-minute Top of the Pops Christmas Special will be screened at 19:30 GMT on Wednesday.