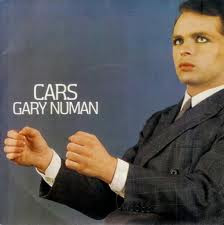 CAR COLLIDES WITH NUMAN TOUR BUS
Gary Numan was back on the road last week, for a few gigs ahead of his appearance at this weekend's ATP event in Minehead, and not without a bit of drama after a car collided with his tour bus in East Sussex.

According to reports, the driver of the car involved in the collision was trying to overtake Numan's double decker tour bus when it collided with the coach, causing it to go spinning up the embankment at the side of the road. Numan, on the upper deck of the bus at the time, says he saw the car pass his window before crashing into the embankment. Yet, fortunately, the driver was OK.

The Sun quotes Numan thus: "We felt a thud and the bus stopped really quickly. People were thrown to the floor. I was on the top deck and saw this little gold car the same height as me going past the window. When the car stopped we could see the woman putting it into neutral before getting out as if it was something that happened every day. We waited for the police to arrive so she wasn't on her own".

Given no one was hurt, there's probably room for some lame gag based on Numan's famous 1979 hit 'Cars' here. I just can't think of one. Something about Numan having a history of hits with cars. Flesh it out for yourself.