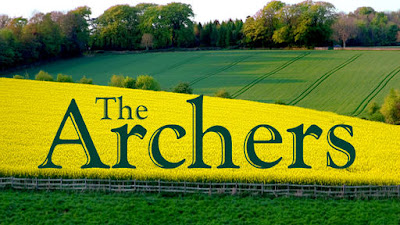 Jazzer has a surprise for Lynda but will her show be all right on the night?

Tom tells Brenda he can’t understand how Pat has reassured Helen that Rich isn’t a threat. While they prepare for Christmas Round the World, Brenda senses that Tom is protective of Helen and Henry because they are all threatened by Rich. He acknowledges that he is worried Rich will turn up in the future and demand a stake in the farm. Brenda reassures him that all the effort he has put into the farm since John died won’t be ignored by Pat and Tony.

At the Village Hall, Jazzer and Jim keep Lynda in the dark about their pieces until the last moment, which exasperates her. Jim’s worried until the final minute because his projection equipment is late arriving. Meanwhile Elona’s family’s Albanian contribution is warmly received.

All are delighted when Jimreads a translation of his Latin extract. It’s from Virgil’s Georgics,about the farmer’s winter rest,and the Latin itself is projected onto a screen.

Lynda’s still nervous about Jazzer’s contribution but his song from across the ocean – Have Yourself a Merry Little Christmas – surprises and delights her. She’s touched when Robert points out that the evening’s lovely surprises are all thanks to her.