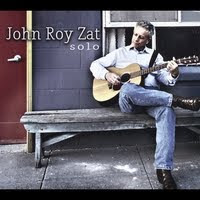 John Roy Zat – Solo (Flyin’ Bayou)
John Roy Zat comes from a long line of American singer-songwriters who occupy that space between traditional country and folk music. You know the people I’m talking about; Guy Clark, Steve Young and John Prine come to mind, but there’re probably a thousand others. In olden times (the ‘70s) they were often referred to as the ‘new Dylan’, but feel free to delete ol’ Bob’s name and replace with Hank Williams, Woody Guthrie, Gram Parsons or Ryan Adams, depending on your age, tastes or inclination.

There’s enough silver in Zat’s hair to suggest he’s not the new anyone, but that hasn’t stopped him writing a collection of songs that tap straight into that tradition. The fact that he’s a talented fiddle player brings another dimension to “Solo” and it fleshes out his guitar and vocal to good effect. The album begins with “Headed for the Promised Land” adapted, I believe, from an old Chuck Wagon Gang spiritual, though its origins are probably far earlier, and it’s a fine introduction. “Irish Waltz” tells the story of meeting his wife and “Moths to a Flame” is simply a first-rate song of loss and redemption. The final two cuts, “Down in Mexico” and “Long Train Coming” end proceedings on a high, the latter an upbeat train song – surely the stock-in-trade of any American singer-songwriter worth their salt.
http://www.reverbnation.com/royzat
Rob F.
Posted by Bangs at 12/12/2011 05:22:00 pm