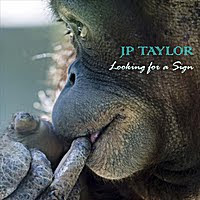 J.P. Taylor - Looking For A Sign (Independent)
J.P. Taylor is a teacher, a naturalist and a musician, and over the last decade he’s released a series of educational albums that he’s used in the classroom to help get across his conservationist message. They deserve a far wider audience. His songs are clever and witty, his arrangements have plenty of pop appeal, and he sings with a voice that’s part Colin Hay and part Steven Stills. Also, if his songs make you think about what’s going on around you, and inspire you take a little affirmative ‘green’ action within your own life, surely that’s no bad thing, either.

“Looking For A Sign” begins with “I Sing for the Trees”, a rousing statement of intent, with a huge hook and the sort of addictive melody that only years of therapy will remove from the subconscious. The production is spot on (is that a horn section I hear?) and it would sound at home on any grown-up radio station that cared to play it during daytime hours. “Conservation Nation” seems to have been transported from 1972, with it’s West Coast feel and “We’ve Got the Power” is a righteous call to arms. Obviously, if any of the above seems relevant to you, and as a human it should do, we recommend downloading your copy rather than buying the CD. Every little bit helps.
http://www.jptaylormusic.com/
Rob F.
Posted by Bangs at 12/15/2011 06:35:00 pm