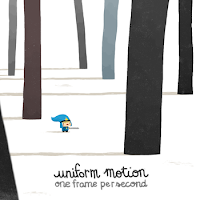 Uniform Motion - One Frame Per Second (Independent)
"The Victory Of Buckets And Doors", the track that opens this pretty sparkling third album from Uniform Motion, starts off at about one beat (frame) per second. It then increases the tempo slightly, and you have an interesting, folk-tinged three minutes. This gives way to "Our Hearts Have Been Misplaced In A Secret Location" which is just over four minutes of folk-tinged singing, with an accordion 'sound' in the background mix - which is quite a delight. Both have ludicrous titles, as you can see. This is all to do with the album’s concept, supposedly about the adventures of a little knight, and it appears to be linked to a video game.

Well, if you can get past this rather bizarre set-up you’ll probably get a buzz from the music. It is pretty good stuff, in a Sufjan Stevens sort of way. Of course, the bizarre might appeal to you anyway, and if that’s the case, you’ve got yourself a win-win situation, and it rarely gets better than that, does it? I do like the indie folk music they produce here, and they obviously have a talent for making strange but melodic sounds that operate alongside the voice most effectively. The voice itself is pretty good, too, bright, warm and pitched just about right. Go search for the little knight yourself.
http://uniformmotion.net/
Kev A.
Posted by Bangs at 12/16/2011 03:21:00 pm