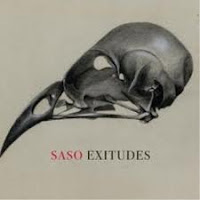 Saso - Exitudes (Melted Snow)
I remember the first album by Saso, “Big Group Hug”, from 2001, a gentle, guitar / piano led collection, with restrained, warm vocals on some of the tracks, that seemed to give you a hug when you listened to it... sort of. It was a comfortable and pleasant affair, good to hear on an evening when you were seeking some quiet time. Still is, in fact.

Ten years on, and we have a slightly more vigorous approach from this Irish male duo, not a million miles away from Talk Talk's slower musical compositions, though not a million miles away from that debut album, either. The piano is still to the fore and, at times, so is a rather splendid acoustic guitar. They’re a complete delight on "From Limbo", for example, where the vocals are now strained rather than restrained, but they do capture this more upfront, ever so slightly more urgent approach. The strings are also a superb touch.

It’s the vocals, though, that are now truly centre stage. ‘Unique’ is the word that comes to mind in any attempt to describe them - falsetto at the core, and a little on the downbeat side, as if the voices are seeking solace within the songs. Whenever they appear, the effect is melancholic, even on the uptempo numbers like "Idle Spirit". This track, the halfway point, appears to usher in a quicker, less hushed sound, adding not only some variety to the proceedings, but also a slightly different direction.

I can't think of anything not to like on this album. It isn't a set of songs that you would want to play at a party, of course, as it’s far too sombre, but for the long winter nights in, this could be half a tonic, whilst you drink mulled wine, which is the other half.
http://www.saso.ie/EPK/
Kev A.
Posted by Bangs at 12/10/2011 03:24:00 pm