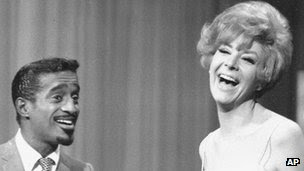 Kaye Stevens, the US singer and actress known for her appearances with the Rat Pack and on Johnny Carson's chat show, has died in Florida.

The 79-year-old, who had breast cancer, died on Wednesday at a hospital north of Orlando, a close friend said.

Born Catherine Stevens in Pittsburgh in 1933, she started out as a drummer and singer before going on to act in movies and television shows.

In 1963 she was nominated for a Golden Globe for her film role in The Interns.

Stevens performed with Frank Sinatra and other members of the Rat Pack, including Dean Martin and Sammy Davis Jr.

She also sang solo in Las Vegas and New York and performed for US soldiers during the Vietnam war.

In the 1970s she was a regular panellist on TV game shows and had a recurring role on the soap opera Days of Our Lives.

She later started her own ministry and helped to build a church in the Florida city of Margate, where a park was named in her honour.