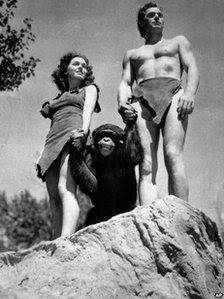 A chimpanzee who apparently starred in Tarzan films in the 1930s has died at the age of 80, according to the sanctuary where he lived.

The Suncoast Primate Sanctuary in Palm Harbor said he died on Saturday of kidney failure.

He had acted alongside Johnny Weissmuller and Maureen O'Sullivan in Tarzan films from 1932-34, it claimed.

The animal loved fingerpainting and watching football, and was "soothed by Christian music".

Sanctuary spokeswoman Debbie Cobb told the Tampa Tribune that Cheetah came to live at Palm Harbor from Johnny Weissmuller's estate in about 1960.

Chimpanzees in zoos typically live 35 to 45 years, she said.

It is not clear what lay behind Cheetah's longevity, or what evidence there is for it.

A sanctuary volunteer told the paper that fingerpainting was not Cheetah's only talent.

"When he didn't like somebody or something that was going on, he would pick up some poop and throw it at them," Ron Priest said. "He could get you at 30 feet [9m] with bars in between."

The Florida "Cheetah" is not the only chimpanzee who has been described as Tarzan's companion.

A chimp known as "Cheeta" who lives in California was for a long time claimed to be the chimp in the films, but, following research for a biography, that claim has been withdrawn.

It is possible that several different animals were used while filming the Tarzan movies.