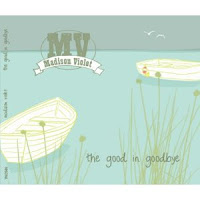 Madison Violet - The Good In Goodbye (True North Records)
The semi-husky voice is in the right place, as is the sweeter vocal that shares the songs. I've no idea who owns which voice in this female Canadian duo, and up to a point it hardly matters. They very nicely blend together in a country-folk way, that’s very easy on the ear. The pleasant backing comes from six fellows, one of them being Les Cooper, their producer, and it fits the bill pretty much perfectly. So, that takes care of the first six tracks then. This is, er, okay.

Right, what's next? Thankfully, a bit of contrast. "Come As You Are" ups the ante, gently breaking out of the middle-of-the-road Americana shell, with a decent guitar riff, cruising harmonica, and a sterner attack on the lyrics. "Colour In Grey" slows down to an almost halt, the voices a bittersweet confection encouraged by the lap steel of Cooper. The uptempo "Emily" follows, with great banjo as well as frisky vocals, and "Cindy Cindy", which doesn’t sound a million miles away from Eddie Cochran's “Cut Across Shorty”, continues the trend and sparkles for two and a half minutes. They finish with a glorious ballad, "Christy Ellen Francis", a beautiful piece of writing, singing and arranging.

Recognition of any sort has been a long time coming for these two women. '”The Good In Goodbye” is their fourth album, in a recording career going back to 2004. If they’d condensed those first six tracks into one, or perhaps two songs, they would have made a pretty good mini-album, using just their best material to sing their duets on.
http://www.madisonviolet.com/
Kev A.
Posted by Bangs at 12/10/2011 03:06:00 pm