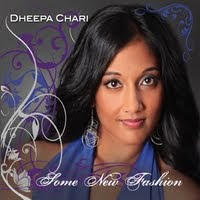 Dheepa Chari - Some New Fashion (Independent)
I must admit I’m always excited to find a talented new jazz vocalist. Dheepa Chari grew up in Dallas, studied vocal performance at Southern Methodist University and then moved to New York where she directed an acapella group at Columbia University. Her debut EP, "On 4th Street", released in late 2010, garnered serious attention in the jazz world, as will, I’m sure, her new collection “Some New Fashion”. Its 11 tracks sound utterly contemporary and her small but gifted band make the most of the diverse range of songs, with brave and intuitive arrangements that project a variety of styles, from blues to swing.

She launches here debut long-player with the Duke Ellington penned “Rocks in My Bed”, with erstwhile support from keyboard maestro Marc Gaston, and a smattering of New Orleans trumpet. It’s an incredibly strong opening tune, which she follows just as notably with Luiz Bonfa’s bossa nova standard “Black Orpheus”, from the 1959 Brazilian movie of the same name. The song selection shows a genuine desire to explore different forms of songwriting and the application of Chari’s distinct method upon seemingly unrelated styles, from Paul McCartney’s wonderful “Here, There, and Everywhere” to Lane and Harburg’s “Old Devil Moon”. It works so well for a number of reasons, but most of all, the band always plays to Chari’s strengths, leaving her tremendous amounts of space to perform, but without sacrificing their own virtuosity.
http://www.dheepachari.com/Home.html
Rob F.