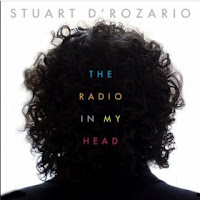 Stuart D’Rozario – The Radio In My Head (Independent)
“The Radio In My Head” is Stuart D’Rozario’s third album. Over the years, the Minneapolis singer-songwriter has become something of a specialist in the art of marrying pristine pop hooks with an easygoing, unhurried vibe. Earlier outings have earned comparisons to Billy Joel and John Mellencamp, and they’re not far off, but I’d like to add Gary Louris’ Jayhawks and Ric Ocasek’s Cars to the list, together with folk-pop pioneers like Gerry Rafferty and at a pinch, the much-maligned Gilbert O’Sullivan.

Now, the latter pair may not be the hippest names to drop, but both of them were skilled songwriters with an ear for a tune. So it is with D’Rozario. I don’t expect to see him on the cover of NME anytime soon, but that takes nothing away from the inherent quality of his records. “The Radio In My Head” begins with the excellent title track. I can’t help but think of pop punk deities like Elvis Costello and the Buzzcocks, though the production and presentation is altogether gentler, but without sacrificing either hooks or thrills. “Never Enough” is pure old school power pop, beautifully played by D’Rozario’s band and could’ve been a huge hit in 1979. The nostalgic “The Girl Who Hid Everything Inside” is a perfect example of D’Rozario’s softer side. Plaintive and a little mournful, it still comes with a tune that’s going to have to be surgically removed.
http://www.songsaboutnow.net/
Rob F.
Posted by Bangs at 12/20/2011 09:53:00 am