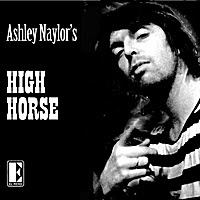 Ashley Naylor - High Horse (El Reno Music)
Ashley Naylor is probably best known as singer, songwriter and guitarist for the Australian band Even. The trio released a series of well received albums in the late nineties and early noughties, and were considered to be one of the star attractions on the bijou international power pop scene. If you were a customer of Minus Zero (London, UK) or Not Lame (Fort Collins, USA) you knew exactly who Even were and treasured their records (especially the first pair: “Less Is More” and “Come Again”) alongside albums by The Posies, Jellyfish and The Rooks. As the decade entered its second phase, things quieted down for the band with just 2008’s self-titled album and a couple of singles to indicate their continued existence. Since 2006, Naylor has played in Paul Kelly’s touring band and with The Ronson Hangup and in the Manta Trio.

Okay. That’s the biography out of the way, onto the record. “High Horse” is Naylor’s debut solo long-player (there was an EP in 2006) and he’s lost none of his pop nous. The album is bookended by a two instrumentals, “Fairhaven” and “Fairhaven II”. Both are simple affairs with an acoustic guitar being strummed enthusiastically and a lead guitar adding subtle emphasis. The first ‘song’ is “Run Away to the Sun”, built around a piano riff, its themes of escape and renewal contrast sweetly with Naylor’s compact arrangement. “Gordon Lightfoot” is a tender, pedal steel powered country rock song, funnily enough not unlike Gordon Lightfoot. That’s followed by the stomping “Last of the Longhairs”, which sounds like a long lost classic from the Paisley Underground. For easy reference, think the first Dream Syndicate album.

The second half begins with a short piano instrumental, before “Jetset Paupers” takes us into another world. Naylor speaks his story, and double tracks the vocals on the chorus – it’s a gem of a cut. “Berlin 92” is a long (over five minutes) instrumental, with lots of sustained electric guitar played over a basic piano line – perhaps he’s been listening to Bowie’s “Low” album. “Almost” is the last vocal track on the record, and it returns to languid country-rock, with some excellent pedal steel to the fore and Naylor in fine vocal form. It’s one of many first-rate songs on “High Horse” and although it’s not a long album, there’s plenty to satisfy the discerning music fan.
http://www.facebook.com/AshleyNaylor.Official
Rob F.
Posted by Bangs at 12/15/2011 06:29:00 pm