Adele track most played song on UK version of Spotify... 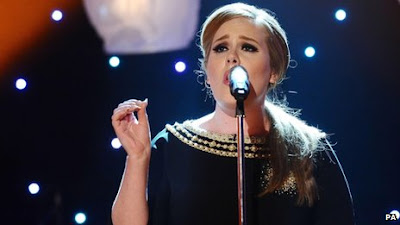 Adele track Rolling In The Deep has beaten the likes of Grenade by Bruno Mars and S&M from Rihanna to become Spotify UK's most played single of 2011.

The singer also had another song, Make You Feel My Love from debut album 19, in the top 10.

Rihanna was the most successful artist with three tracks in the rundown including What's My Name? (eight) and Only Girl In The World (nine).

Her track Firework was at number 10 on the music streaming service rundown.

Jessie J's Price Tag and Do It Like A Dude were at fourth and fifth place.

Foster The People's Pumped Up Kicks was top in America while in Spain On The Floor from Jennifer Lopez was the most played single.

Adele also topped the Spotify list in France and the Netherlands.

The Spotify top 10 in the UK was as follows:

1. Adele - Rolling In The Deep

5. Jessie J - Do It Like A Dude (Explicit version)

9. Rihanna - Only Girl In The World