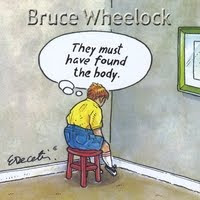 Bruce Wheelock - They Must Have Found The Body (Independent)
There’s something very appealing about Bruce Wheelock’s “They Must Have Found The Body”. It sounds like one of those records released in the ‘70s by the ex-frontman or songwriter of a prog-rock band, who still wants to push the envelope, but equally feels the need to trim away the excess and let the song breathe. Peter Gabriel’s an obvious example, as is Peter Hammill and Anthony Moore - and it’s the late ‘70s and early ‘80s recordings of the latter that draws the easiest comparison. He’s captured the same sort of ambitious flow to his record, and though there are a few featured instrumentals, they compliment the songs and complete the vision.

Vocalist Shay Dillon appears on two tracks, the opening “Outside” where she and Wheelock divide the song equally and “Breathless” where she’s on her own. Both are excellent, in particular “Breathless” where she soothes her vocal over various layers of electronic backing; it’s a fantastic track that drives through the future on a stuttering riff. There’s no shortage of electricity and sweeping synths anywhere on “They Must Have Found The Body”, and 30 years ago Wheelock would’ve undoubtedly found a nurturing home on Mute Records. As it is he’s a man out of time, but that’s really not a concern for anyone who loves the sound of vintage-style electronica, bold arrangements and elaborate yet wholly accessible pop music. You can count me in.
http://www.reverbnation.com/brucewheelock
Rob F.
Posted by Bangs at 12/12/2011 06:39:00 pm