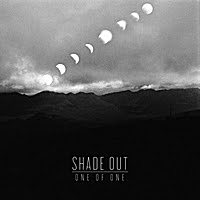 Shade Out - One Of One (Independent)
Biographical information for Shade Out is decidedly thin on the ground. Whether it’s an intentional tactic to surround the band with a little inscrutability and ambiguity, I don’t know, but these days it’s an unusual method for a band with such overt commercial appeal. I do know they’re a five piece from Tulsa, OK, and “One Of One” is their debut album. Their Facebook page (they’re not completely anonymous) records their influences as Led Zeppelin, Pink Floyd, The Doors, Emerson, Lake and Palmer, Nick Cave and Queen, which I think you’ll agree is quite a list. They certainly bring a dark edge to their songs, not so much Gothic, but it pervades their sound, and is pleasantly unsettling – if you get my drift.

“Other Ways” opens the collection, and does so in some considerable style. Its marching rhythm, dramatic pauses, Keith Emerson-esque organ rolls and singer Samantha Smith’s calm, off-hand delivery all combines to shape the track. It’s showy and a little camp, but strange and mysterious, too. They continue that line of approach throughout “One Of One”. “Gunstinger” seems written to accompany pantomime villainy and “Off to the Races” is keyboard heavy and features Smith’s best vocal. “Disappearing” has a great stumbling bass line, and the tension escalates before Starla Robinson’s saxophone brings it home. Great stuff.
http://www.facebook.com/ShadeOut
Rob F.
Posted by Bangs at 12/15/2011 06:40:00 pm