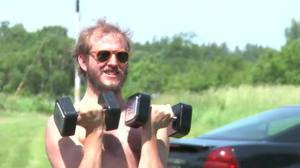 BON IVER'S FITNESS REGIME REVEALED
I can't tell if this is a joke or not. Just look at Justin Vernon and his bandmates working out backstage. Surely it's a joke. But Rogcity Fitness, which posted the video below to promote a new fitness DVD release, seems to be a real company run by fitness instructor Jeff Rogers, with a website featuring testimonials from people other than Vernon. Also, the message in the video is actually very positive and would be a weird thing to mock.

Anyway, the Bon Iver main man says in the video: "When I started doing it, there was just a lack of... hating it ... Just, like, the word 'workout' sort of sucks. It doesn't make you feel good, it's sort of, like, dorky, or something. [But] when I started working out with Jeff I just felt so good".