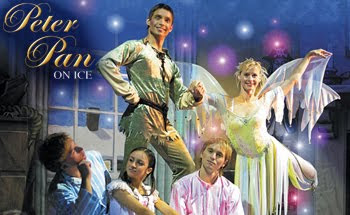 Peter Pan On Ice at De Montfort Hall, Leicester.
Is there anyone out there unaware of the Peter Pan story? Through J.M. Barrie’s original play, which was soon expanded into a novel, various films, most famously Walt Disney’s classic 1953 adaptation, the story of Wendy, Tinkerbell, the boy who wouldn’t grow up and their adventures in Neverland is indelibly embedded in the nation’s psyche. Which makes it ideal for interpretation in various different ways. De Montfort Hall’s production places a rink on stage and with the minimum of spoken narrative allows the story to be told almost solely through the medium of ice dance.

It’s by no means a large performance space, but the Russian troupe coped admirably with its limitations, with up to a dozen skaters on stage at any one time. There were infrequent tumbles, and let’s be honest, the occasional wipeout adds considerably to the excitement, especially in the front row, but on the whole the levels of skills on display were remarkably high. Hours spent watching Torvill and Dean means we’re all armchair experts when it comes to the moves and leaps, and there were plenty of Salchow Jumps, Haircutters and Death Spirals to satisfy the fans.

The audience spanned the age groups, ranging from 8 to 80, and it wasn’t unusual to see three generations of a family take their places. All seemed to enjoy themselves, and I don’t think I’ve ever seen a show at De Montfort where not a single audience member has left their seat during an entire show.