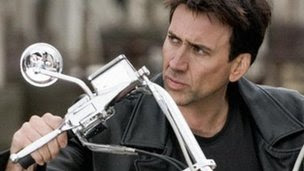 The rights to Marvel Comics hero Ghost Rider - played by Nicholas Cage in two films - belong to the firm and not the writer who conceived him in the 1970s, a New York judge has ruled.

Gary Friedrich launched a legal bid to cash in on film rights in 2007.

The judge ruled that, as he had cashed cheques from Marvel, he had no case.

Mr Friedrich's lawyer, Charles Kramer, did not comment on the ruling but said his client would appeal against it.

Manhattan federal court judge Katherine Forrest agreed that Ghost Rider - a motorcycle-driving superhero with a skeletal head that is sometimes on fire - was conceived by Mr Friedrich.

The character's first appearance for Marvel Comics was in 1972.

When the first Ghost Rider film came out in 2007, Mr Friedrich sued Marvel claiming it had infringed his rights because he owned the character.

He sought compensation for its use in films, toys, video games and other merchandise.

"If Friedrich... had any rights to the character or the work at the time he endorsed the cheques... he relinquished those rights to Marvel," the judge said.

She said that, as creating comic books also involved so many different processes, Ghost Rider was undoubtedly owned by Marvel.

He had also signed an agreement with Marvel in 1978 relinquishing rights in exchange for more future freelance work, she said.

In an earlier court hearing, Mr Friedrich said he thought he had given Marvel the rights to use Ghost Rider in comic books but that he retained all other rights.

But such an understanding had never been put down in writing, he said when questioned by Marvel lawyers.