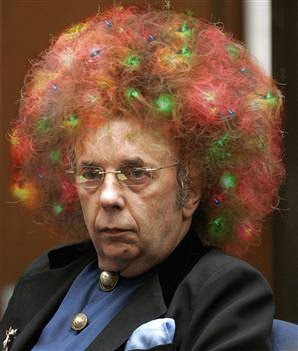 December’s well and truly here, there’s a chill in the air and snow’s on the way. The days are short, everyone’s spending more money than they’ve got and January’s going to be horribly depressing for all of us. Frankly, the world’s in a mess, half of Europe’s bankrupt and the other half speaks German. Suicide rates are soaring, the anarchists are running up their black flags and sharpening their knives; only one thing that can save us now and that’s a big stack of new Christmas music…

Right let’s begin with those giants of West-Country high-culture, those doyens of zider-fueled nights behind the cowsheds, the only band for whom Farmer Giles is a fanclub member rather than the result of sitting for too long in the back of a cold van. Indeed, the only popular beat combo to make Reg Presley sound like a erudite, sophisticated bloke; ladies and gents, I give you The Wurzels…

The Wurzels – The Wurzels Christmas Album (CIA Ltd.)
Having watched more than my fair share of Top Of The Pops 1976, I feel like I’m more than acquainted with The Wurzels’ oeuvre. The only thing they enjoy more than lashings of fermented apple juice is singing songs about combine harvesters, so an album of Chrimbo standards is well out their comfort zone. Still, they don’t do a bad job of “White Christmas” with plentiful “ooh argh ooh” backing vocals. Obviously Bing’s spinning in his grave, but he always was a miserable old sourpuss. Unfortunately, their version of “Fairytale Of New York” is plain rotten, and Shane MacGowan’s probably spinning in his grave too, but that’s because he’s not dead, and shouldn’t have taken that shortcut home across the graveyard.
http://www.thewurzels.com/

John Baumgardner & The Paper Doll Baptists – Fruitcake With Nuts (J. Bomb Records)
This is more like it. John Baumgardner has joined with long-time friends and altos Amy Hueneman and Markita Conner to produce a top album of holiday jazz-pop. I like easy-listening jazz-pop and I like it especially this time of the year. Baumgardner has selected an interesting collection of songs which probably reflect American tastes rather than British ones, but I’m all for shaking things up, and there’s more than enough first-rate arrangements and performances to satisfy the most jaded Christmas music lover. Best of all are “Love & Joy (The Wassail Song)” and “‘Zat You, Santa Claus?”
http://johnbaumgardner.com/

Mark Brine – The Carol And The True Folk Legend Of Jack Frost Soundtrack (KJK Records)
Putting some of that ol’ time relijun back into the festive period, Mark Brine’s epic tale of Jack Frost and “The Carol” is available as a 13 hour download or as a double disc with just the music. It’s the latter we’ve got here, and though here at Bangs we don’t generally go for the spiritual side of Christmas, we’ve always got time for anyone with proper ambition and the wherewithal to do something about it. We’ve also always enjoyed Brine’s releases in the past, and this one’s no different. You can’t help but admire him for sticking with what he believes in, and for bringing out a Christmas album with a track called “Wordless Dirge For Michelle”. That probably won’t be the single.
http://www.markbrine.com/

Ike Moriz – Starry Night (Mosquito Records London)
Ike Moriz is a star of the South African lounge scene, with a dozen albums under his belt, and like all the finest practitioners of what we like to call “the croon”, a Christmas album is nigh on compulsory. “Starry Night” is his 2009 holiday record and it doesn’t disappoint. Most of the classics are covered, from “It's The Most Wonderful Time Of The Year” to “Rudolph the Red-Nosed Reindeer”, and Moriz does a sterling job with all of them. A special mention for the one original song in the collection “Peace Dream” sung with the exceptional Brothers With Voices choir, and one for the fact fans – it is possible to “Let It Snow” and have a “White Christmas” in South Africa’s “Winter Wonderland”, but you’ve got to be in the Maluti Mountains. So there!
http://www.ikemoriz.com/