Review: Left In The Attic 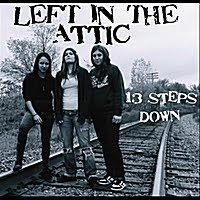 Left In The Attic - 13 Steps Down (Independent)
Left In The Attic is an all-female trio from the Bronx. They are Murphy on drums,
Crissy on bass and Jacks plays guitar and sings. The band have been around since 2008, “13 Steps Down” is their second album, and they also do a natty line in stenciled t-shirts – those who remember the ads for “Clash Clothing” in the back of the NME will know what I’m talking about. They also make a fine racket. Their grungy take on punk rock owes much to originators like Hole and L7, but they carve out their own identity with strong songwriting and forceful playing. They’re genuinely compelling.

Jacks’ husky and direct singing style gets its first airing on “21st Century Blues”, though it’s the feisty rhythm section that drives the song on. On both “Anthem” and “Outta-Hand” she almost raps or speaks her words, the latter with sparse bass and drum accompaniment brought to mind those classic early Beastie Boys sides. Coincidently there are 13 tracks on “13 Steps Down”, and highlights come thick and fast. “Bad Blood” is slow and intense, “Master Plan” incorporates the sort of rolling riff that Black Sabbath invented and Soundgarden purloined, and “Cough Syrup” wanders into classic rock territory, but does so without sacrificing their inherent aggression. Full marks to them.
http://www.facebook.com/leftintheattic
Rob F.
Posted by Bangs at 12/15/2011 06:43:00 pm