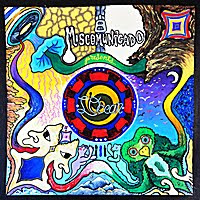 Miscomunicado - L’Ocean (Play Positive Records)
Miscomunicado describe themselves as a progressive, psychedelic blues-rock band. There are elements of all those genres in what they do, but equally there are tracks here that wouldn’t have sounded out of place on the John Peel show circa the post-punk years, or the main stage of last year’s Reading Festival. They’ve a lot going on and it’s to their considerable credit that they sound like the same band for all 16 tracks of their one hour and 15 minute debut album, the nattily titled “L’Ocean”.

The album begins with shakers and a walking bassline, before there’s a shout and the guitars (three guitarists are credited) arrive from every direction, in different styles. Vocalist / guitarist Dan Scott sings with a voice that screams 1980, before flirting with Zappa-style flights of fancy, and a spoken coda. It’s a fascinating introduction to the record. Incidentally, the track’s called “Situations” – you may want to make a note of it.

There are plenty of other highlights: the staccato strings and drone of “Fkapoija”, “Accessories” rattles along like Iggy’s “The Passenger”, for a bit, and “The Girl With the Glitter On Her Back” is birthed from what sounds like a giant egg cracking open, or perhaps it’s a slow motion explosion, or something of that ilk. When the song arrives it plays it pretty straight, but the guitars aren’t listening and head for the psychedelic hills. It all falls apart on a number of occasions, but gathers itself like a tie-dye cockroach wandering through a nuked cityscape. Perfect.
http://miscomunicado.bandcamp.com/
Rob F.


FOOTNOTE. If you like the sound of L’Ocean, the band are selling the download for the bargain price of $3. Head over to their Bandcamp page (link at the base of the review) for details.