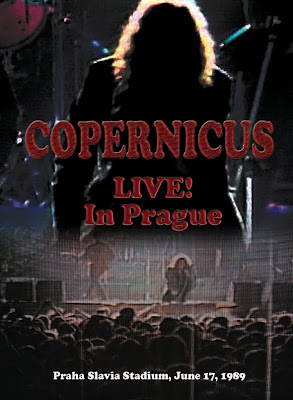 COPERNICUS "Live In Prague! Live" (DVD/NTSC - all regions)
In 1989, after the release of the album "Deeper", COPERNICUS received many requests to appear live in cities in Europe -- including Moscow, Sopot, Prague, Vilnius and Berlin. It had received a lot of attention from the press and got tremendous radio airplay. This was a time of heightened tension in many countries, separated from the rest of the world by their mostly totalitarian regimes. This concert footage documents the entire experience at Prague's Slavia Stadium. For the nine thousand fans, it was a rewarding experience. COPERNICUS and the audience interacted in an extraordinary manner. The effects of COPERNICUS' songs such as "The Authorities" and "White from Black" and others were visibly a big blow to the audience eager to absorb more of COPERNICUS' lyrics and the gripping original music performed by those musicians -- which included Larry Kirwan of Black 47 on keyboards, guitar and vocals, Mike Fazio on guitar, Thomas Hamlin on drums, and Dave Conrad on bass. The use of split screen technology with footage from separate sources heightens the experience that one almost feels that he is right there at the mixing board watching every move from the stage and from the audience's point of view. This video certainly is a document from the time when bands would go out and venture into these far away places. It is worth its price in gold.
Posted by Bangs at 12/01/2011 08:13:00 am