You Me At Six nominated for five Kerrang! awards... 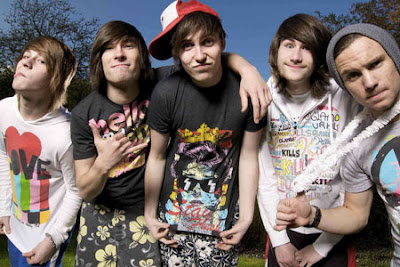 You Me At Six lead this year's Kerrang! rock magazine nominations list.

The Surrey group are twice up for best single, album, live band and British band.

You Me At Six front man Josh Fransceschi said: "To be up for best British band four years in a row is just insane.

"The people at the awards are going to think there's a problem with the slide show when our two songs come up in a row [for best single]."

St Albans hardcore band Enter Shikari are up for best album and best live band with Young Guns up for top single and album.

Singer Danny Worsnop and lead guitarist Ben Bruce are also up for two new awards: Tweeter of the year and hottest male respectively.

"What's most exciting about this year's nominations is how strong the new bands categories are.

"Of course, you could have said the same thing when You Me At Six were included in said categories a few years ago, and look where they are now.

"Much is made of how fun and debauched the Kerrang! Awards are. I prefer to see them as proof of how strong the rock scene is."

30 Seconds To Mars, My Chemical Romance and Evanescence are all up for best international band and Download competes with the likes of Reading and Leeds for top festival.

Sonisphere, cancelled this year, misses out.

More than 280,000 votes were cast to decide on the short lists for this year's awards.

They take place in the same week as the Diamond Jubilee, on Thursday 7 June.

New categories this year include best TV show, video game, tweeter of the year and villain of the year - which includes Justin Bieber, Simon Cowell and One Direction.

The Kerrang! nominations are as follows:

Best single
You Me At Six (featuring Oli Sykes) - Bite My Tongue, You Me At Six - No One Does It Better, Young Guns - Bones, Black Veil Brides - Rebel Love Song and Falling In Reverse - The Drug In Me Is You

Best video
Falling In Reverse - The Drug In Me Is You, Mastodon - Curl Of The Burl, Motionless In White - Immaculate Misconception, Paramore - Monster and Bring Me The Horizon - Alligator Blood

Best British band
You Me At Six, Bullet For My Valentine, Asking Alexandria, Lostprophets and Iron Maiden

Best international band
30 Seconds To Mars, My Chemical Romance, Evanescence, A Day To Remember and letlive

Best film
The Hunger Games, The Woman In Black, The Inbetweeners, The Muppets and The Girl With The Dragon Tattoo