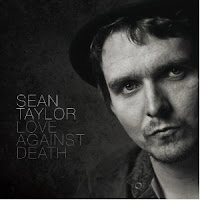 I like Sean Taylor's politics, which add up to opposing the greed of today's world, partly (wholly?) brought about by Thatcher and Blair. The music is also easy to like, though maybe easier if you share his political views.

He kicks off (and out) straight away on "Stand Up", a musical tonic to anyone who grieves over the avarice that exists today “Wipe away the poverty, wipe away the greed... I'd rather die on my feet than live here on my knees... The time has come, the choice is here... Open up your arms you got nothing to fear…”; so you’re pitched into the politics right from the off. I can’t imagine this going down well with dinner guests, but it’s ripe nourishment for the left-of-centre and the conscientious.

However, the politics get less obvious on some of the material here (this is a long way from a rant), and the issues that he writes about are comfortably numbed by the swaddling of the singing with fine tunes and rousing instrumentation. The message remains, but it’s softened by musical guile. There’s more here than protest songs, too, and with paeans to Neal Cassady ("Cassady") and Glastonbury at midnight ("Absinthe Moon" - which could be a long lost Lloyd Cole song) he exhibits a broad canvas. Of course, we’re still traveling in the left hand lane, but he introduces intriguing possibilities with these facets of his nature. He wrote all of it except for the age-old miner's paean "Sixteen Tons", which he claims is still as relevant now as it was 60 odd years ago; true, and his own miner’s song "Coal Not Dole" is good enough to be heard in 2072.

Superbly written by Taylor and beautifully played and produced (Mark Hallman take a bow), “Love Against Death” is a must for anyone with their heart in the right place, and their soul open to the less fortunate.
www.seantaylorsongs.com
Kev A.