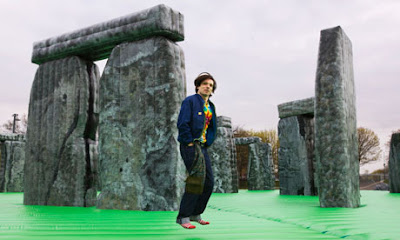 Artist Jeremy Deller will represent Britain at next year's Venice Biennale, the British Council has announced.

The Turner Prize winner will present a solo exhibition at the British Pavilion from June to November 2013.

His installations include a recreation of a 1984 confrontation between police and striking miners and an inflatable model of Stonehenge entitled Sacrilege.

Lucian Freud, Anish Kapoor and Tracey Emin are among the artists who have represented the UK in previous years.

The British Council has commissioned leading artists to represent the UK at the Venice Biennale since 1938, with the aim of celebrating the best of emerging and established British art.

Chris Dercon, director of Tate Modern, who sat on the selection panel, described Deller as an "exciting and daring choice".

"He is a master of an art which is very different from most contemporary art production," Mr Dercon said.

"His observations and actions, invoking and depicting the harsh morals of contemporary life, are incredibly precise yet full of comical relief."

Deller's inflatable Stonehenge was unveiled in Glasgow last month and will visit London during the Olympic Games.

Another of his works comprised the wreck of a car that was bombed in Baghdad, intended to spark debate about the conflict in Iraq.

The Venice Biennale is one of the world's most prestigious contemporary art showcases and was first held in 1895.