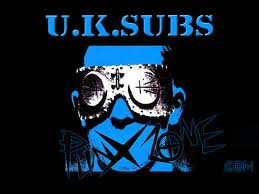 The U.K. Subs are an English punk rock band, among the earliest in the first wave of British punk. Formed in 1976, the mainstay of the band has been vocalist Charlie Harper, originally a singer in Britain`s R&B scene. They were also one of the first street punk bands.

Career: The U.K. Subs were part of the original punk movement in England that formed in 1976, with the initial name of the Subversives. The band`s founder, Charlie Harper selected guitarist Nicky Garratt, bassist Paul Slack, and various drummers (eventually Pete Davis became fairly stable) under the initial name "U.K. Subversives".

The London based band`s early line-up changed frequently. Their style combined the energy of punk and the rock and roll edge of the then thriving pub rock scene. The band had some hit singles such as "Stranglehold", "Warhead", "Teenage", and "Tomorrow`s Girls", with several of their songs managing to enter the UK’s Top Forty.

The band played several John Peel sessions in 1977 and 1978 for BBC Radio 1, and then signed a recording contract with GEM Records. Under GEM, the U.K. Subs recorded an album in 1979 called Another Kind of Blues. The group also played a few opening gigs for The Police, as well as recording a set at The Roxy (a punk club), which was issued in 1980 as Live Kicks. Their biggest selling album came with 1980s Crash Course.