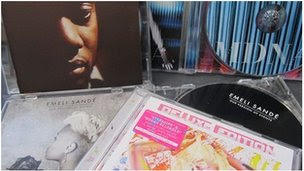 UK digital music revenue has overtaken sales of physical formats such as CDs for the first time.

According to figures compiled by the British Phonographic Industry (BPI) digital accounted for 55.5% of the £155.8m spent on music in the UK in the first three months of this year.

The impressive growth in digital boosted the record industry's overall market value by 2.7% to £155.8m and helped to offset a decline in sales of CDs.

The BPI's figures show income from digital sales has risen by nearly a quarter year-on-year to £86.5m.

However, revenue from physical formats, such as CDs and vinyl dropped by 15% and now represents just £69.3m.

The BPI's digital music revenues are based on downloads, subscriptions and ad-supported music services.

They show digital album downloads have risen significantly during the first three months of the year, by a shade under 23%, overtaking revenues from downloads of single tracks for the second successive quarter.

BPI chief executive Geoff Taylor said the results represented a "significant milestone in the evolution of the music business".

"UK record labels have embraced digital to their core, supporting innovation and licensing more new online and mobile services than any other country."

"As a result, the industry's prospects for growth look brighter than for several years."

But he also said cautioned against becoming complacent.

"We will need to see the trend repeated for several quarters to say we have turned the corner - demand for physical CDs remains strong in the UK."

Music Week publisher Paul Williams warned against writing off the CD just yet.

"People get used to a certain way. In the past the shift has been physical to physical but now it's different; it's physical to virtual."

"Generally, the older audience prefers to buy the physical format. That doesn't mean everyone, there are some who will download."

Mr Williams agreed that the growth of the downloaded album is significant. But it is "not fast enough to make up the shortfall in the albums market".

"The CD still makes up the majority of album sales in the UK and that's going to remain the case for some time."