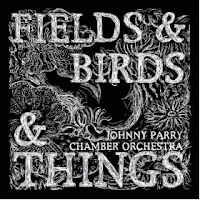 Johnny Parry’s “Fields and Birds and Things” is the ‘sister’ record to an earlier album entitled “More Love and Death”, but having never heard the sibling recording, I’m somewhat at a disadvantage. Still, context isn’t everything, and although the desire to compare one thing with another is basic human nature, “Fields and Birds and Things” will have to stand alone, shorn of family and companionship, and accepting all pertinent critique as its own.

I suspect that reads a little ominous, but as a standalone record, there’s little here to cause concern; with the proviso that artists like Leonard Cohen, Nick Cave, Tom Waits and Marmaduke Dando feature in your multifarious playlists. You see, Parry has a dark side, and he’s a sharer and a giver. Gothic chills permeate his songs, and his group (all 30 of them) answer in kind. Choirs, strings and brass provide plentiful drama for arrangements that place Parry’s songs at the forefront, whether it’s a gloomy brass band monologue (“Lie In A Hole”), the abstractions of “Rebuild It Piece By Piece” or the transcendent optimism of final track “Find Your Way Home”. Aficionados of all the above will find much on “Fields and Birds and Things” to enjoy. I, for one, will be tracking down its predecessor with unbridled enthusiasm.
www.losttoysrecords.com
Simon M.