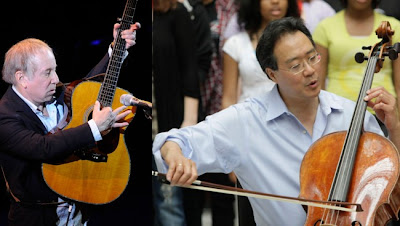 US singer Paul Simon and cellist Yo-Yo Ma are to be the recipients of this year's Polar Music Prize.

The award, which is Sweden's highest music honour, is presented annually to both a pop act and classical performer.

It is given in recognition of "exceptional achievements in the creation and advancement of music".

The pair will collect their one million kronor (£91,000) prize from King Carl XVI Gustaf at a Stockholm ceremony on 28 August.

"Nobody else is more deserving of the epithet of 'world-class songwriter'," it said.

"For five decades, Paul Simon has built bridges not only over troubled waters but over entire oceans by (re)joining the world's continents with his music. Paul Simon has compiled a library of songs which will remain open to future generations."

The academy also lauded Ma as "the leading cellist of our time" who had "united people from every continent".

"Yo-Yo Ma has dedicated his virtuosity and his heart to journeys of musical exploration and discovery around the world," it said.

"[He] is living proof that music is communication, passion and the ability to share experience."

The prize was founded by Stig Anderson, the manager of Swedish pop group ABBA, in 1989.