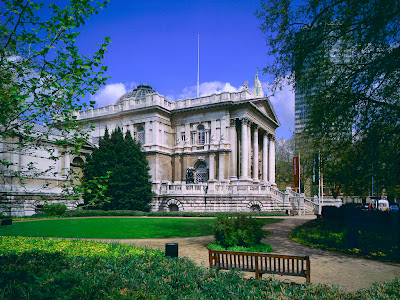 The Tate Britain art gallery in London has raised the £45m required to complete a major renovation.

Nine of the building's gallery rooms are being refurbished, as are the entrance area and other public spaces.

The target has been reached thanks to a £4.9m grant from the Heritage Lottery Fund and £1m given by Tate Members.

The rest has been donated by private benefactors. The Tate fears if tax relief on donations is capped, such fundraising would prove difficult.

"Philanthropy has made a crucial difference to our ability to renovate these galleries and produce these new displays," Tate director Sir Nicholas Serota told BBC News.

"We all fear that the proposed cap on donations will discourage individuals from making this kind of donation."

The Tate's British art collection will be re-hung in a new chronological display in the refurbished galleries.

They will have "much improved illumination", mainly thanks to increased natural lighting, while the reception will be moved from the rotunda to its original position in the foyer.

Donors to the project include oil trader Ian Taylor and the Sainsbury family and philanthropist Dame Vivien Duffield, daughter of tycoon Charles Clore.

Tate Britain director Penelope Curtis said the building's architecture and art collection would "enhance each other in a way which I hope and believe will reward our many supporters".

Sir Nicholas Serota said: "I am extremely grateful to all the donors, foundations and the Heritage Lottery Fund who have helped us reach our funding target.

"This project provides a much needed upgrade to Tate Britain and will hugely improve both the galleries and facilities for our visitors."

Speaking about the proposed changes to tax relief on charitable donations, he added: "I think the Chancellor is listening to the representations that are being made by the charitable sector as a whole.
"I think that's all we can expect at this point. The proposals, come into effect in 2013, not immediately. So there is some time. But, of course... these discussions cannot be protracted ones because uncertainty is really the enemy of philanthropic giving.

"People make their plans for 2013, 14, 15 now. It isn't so much impulse giving that is affected, but those people that are planning how to dispose of the income that they have, that they want to make available to the public sector."

Tate Britain was opened in 1897 and it is visited by around 1.5 million people every year.