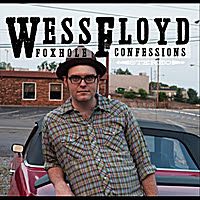 It seemed for a long time that The Replacements mix of punk attitude, power pop licks and unapologetic Americana had been and gone, and potential new torch carriers were decidedly thin on the ground. Of course, bands like The Hold Steady and The Gaslight Anthem changed all that, and now let’s add Wess Floyd’s name to the list. Not that he’s a Johnny-come-lately by any means. His debut record (“The Daisycutters EP”) first saw the light of day as far back as 2006, and the most cursory of listens to “Foxhole Confessions” reveals a confident and able artist well practiced in his chosen genre.

Floyd’s a talented writer, with his finger on the pulse of contemporary styles. That means although his songs are decidedly retro in feel, there’s nothing old-fashioned or outdated about them. Perhaps that makes them timeless; I don’t know, I’ll need a couple hundred years to properly make sure. I do know that songs like “Record Player” and “Williamsburg Nights” deserve to be heard by lots of people. The former is an example of classic, rootsy Southern power pop. Killer hooks collide with crunchy guitars, a monstrous chorus and attitude aplenty. In a just world you’d be able to buy it on 7” vinyl and wear it out on an old Dansette turntable, but you’ll have to download it instead and use your imagination. As for the latter, it kicks in with a superb Stonesy riff before everything falls into place with soulful horns, lots of whoa-whoa backing vocals and Floyd’s words, which bring to mind primetime Springsteen and Westerberg, and somehow merge New Jersey and Memphis into one.
www.facebook.com/Wess-Floyd
Rob F.