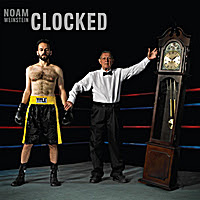 Noam Weinstein is a name that’s new to me, though considering the amount of albums he’s produced over the last decade, I should probably have recognized the name. A good proportion of “Clocked” suggests he could’ve happily come to my attention sooner.

Opener "Kill Me Again" features some glorious organ work, but you’re just getting hot for it when the track ends far too quickly. You could get a little upset by this rather shocking brevity, if it wasn't for its successor "As It Fell".  A quite lovely, brisk song, done to a turn, this time with violins, as well as stilted keyboards keeping time (I think the song is about unrequited love, which, if I’m right, is lyrically spot on...). "Birthday" is a jocular, straight ahead number, and then the ballad "Time's Wider" ends this pleasing spree of tunes, again lyrically it’s right on the money, with glorious cello well to the fore.

The album's momentum is lost with the appearance of "Healthy", a slight blip that heralds a loss of form, which continues on "Owe It All". Neither track comes up to par with what has gone before (despite the superb organ revisited on the former), but the quietude that is possessed by "Silhouettes" redresses the balance somewhat, though something’s been lost, and with affected vocals, stubborn tunes and curious instrumentation, cohesion is sacrificed at the altar of novelty.

Weinstein redeems himself on the final track, "After A While". Remember the cult American singer-songwriter, Elliott Murphy? He released an album in 1977 called “Just A Story From America”, and embers of that album burn here. Worth noting then, as like Murphy's music, the good songs become great, and even those songs that grate are listenable to, once in a while.
www.enoam.com
Kev A.