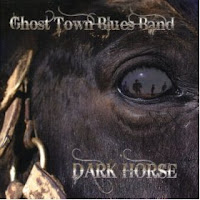 The second release from Ghost Town Blues excels in breadth, commitment and all-round musical proficiency, suggesting it as an early year-end contender in both Blues and Rock divisions.

In the wrong hands an eclectic mix can backfire badly; second division musicians desperate to establish their erudition by clutching at any passing style are often exposed as jacks-of-all-trades and masters of none. The diversification found here is an altogether different proposition, being evidence of vaulting ambition from a band bursting to say what it needs to say. And there’s no suspicion either that breaking out into different modes of expression has detracted from the overall balance; this is a complete sound: full, seductive, and deeply satisfying.

Opener ‘Another Lover’ is straight out of the traps – a mid-tempo southern blues rocker in the contemporary Allmans style, with Matt Isbell’s singing not dissimilar to Greg A himself, and tight interplay between guitar and organ. It stands as a fitting prelude to what follows, and sets a high bar for the quality of what they can deliver. An impressive re-reading of Rufus Thomas’ ‘Memphis Train’, echoes the classic Stax sound with a bank of horns which reappears throughout the album; used sparingly and without a hint of overkill this is a significant supplement to the efforts of the core band. ‘Finish What You Started’ boogies furiously but never threatens to lose its solid rock beat; and the laconic title track ‘Dark Horse’ is delivered with an engaging and hugely pleasing Dr John/ Orleans drawl. ‘Memphis Blues’ is full of hill country mystique, driven by penetrating guitar lines and wailing harp. Isbell shreds his vocal chords on this one like an old juke joint trooper. As a straightforward country/blues/rock number ‘Before You Hit the Ground’ succeeds where similar efforts often fail, simply because it’s a great catchy song that deserves plentiful FM airplay and chart action. ‘Real Funky Groove’ is just that. It has the sort of title that should always be approached with caution since we’ve seen it go horribly wrong so many times, but the big beats, classic chants, massive blasts of brass, and dirty guitar licks make this a key track which segues brilliantly into the jazz soul finale of ‘Biscuit Test’.

Taken as a whole, ‘Dark Horse’ is a triumphant celebration of southern roots music, embedded in a range of blues styles, but not confined by them; and performed by an outfit that is fast earning itself a place among the finest names in the genre. Very good indeed.
www.insidesounds.com
www.ghosttownbluesband.com
Neil B.