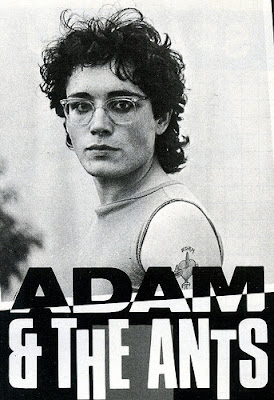 Former punk and 80s star Adam Ant says he supports musicians involved in the Queen's Jubilee concert and is glad the stigma of being a royalist has gone.

The 57-year-old singer - real name Stuart Goddard - said he was heavily criticised for appearing at the Royal Variety Performance in 1981.

"I think the Queen's quite hip. I think she quite likes rock 'n' roll secretly, so I think that's quite a good thing."

Goddard told BBC South East: "I think punk rock was the last great effort, musically or socially, of something coming from the streets that really did make an impact and change everything - largely centred on the Sex Pistols.

"I didn't think it was an anti-royalty thing at all. I'm pretty much the opposite to that. I've always been a monarchist, given the choice of a queen or a king or a president I know which I'd go for."

Goddard, who was famous for dressing as pirates and highwaymen and wearing a white stripe across his face, sold millions of records in the early 1980s.

He said he was pleased the Jubilee celebrations had been embraced by artists such as Gary Barlow.

"It's a complete 360. When I got offered the Royal Variety Show I did it straight away because I'd grown up watching the Beatles and the Stones and everyone doing it and I looked at it as a great honour.

"I got an awful lot of stick for doing it at the time so there seems to be a 360 on that.

"We've got a young Royal Family, William and Harry and Kate who are young enough to be into rock n roll, into pop, or whatever, so it doesn't seem stilted. So I don't think there's a stigma anymore around it."

Goddard also appeared alongside a then unknown Toyah Wilcox in Derek Jarman's 1978 punk film Jubilee - but said it had been "surreal" rather than an anti-royal statement.

The apocalyptic fantasy focuses on the activities of a wild girl gang in 1977.

He added: "I think Jubilee was really a piece of film, a surreal kind of journey that just happened to land slap bang into the middle of the Queen's Silver Jubilee.

"I wasn't doing it to make a statement about the Royal Family or anything like that. I left that to people like The Clash, certain bands that love to be political, which I'm not."

The concert - broadcast live on BBC One and BBC Radio 2 - will be attended by 10,000 people chosen by random ballot.