Portrait of Highland lady kept in cupboard for 100 years restored... 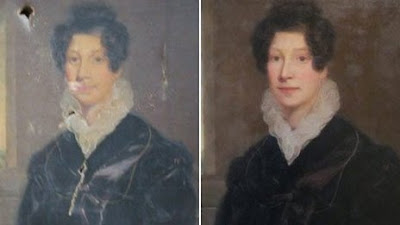 A 19th Century portrait that lay in a cupboard in a Highland castle for more than 100 years has been restored and put on public display.

The painting of a woman was in such a poor state it was not known who she was or who painted her.

Writing revealed by the restoration work showed it to be of Eliza Gordon Macpherson, whose family had owned Cluny Castle where the art was found.

It is being exhibited at the Clan Macpherson Museum in Newtonmore.

The portrait was by Sir John Watson Gordon, who was encouraged to paint by two of Scotland's leading painters - his uncle George Watson and family friend Sir Henry Raeburn.

Other works by Sir John are in the collections of the National Galleries Scotland and the Tate.

In 1850 he was elected president of the Royal Scottish Academy, appointed Queen's Limner for Scotland - her chief illustrator in the country - and was knighted.

Cluny Castle at Laggan, near Newtonmore, was the hereditary home of the Macpherson clan chiefs.

Government soldiers fighting Jacobite forces destroyed the original castle that stood on the site in 1746.

Scots-American industrialist and philanthropist Andrew Carnegie and his wife rented the house for their summer holidays, according to Gaelic language heritage website Am Baile.

Queen Victoria nearly bought the property but, according to Am Baile, was discouraged by bad weather in the area and purchased Balmoral in Aberdeenshire instead.

The direct line of the Macphersons of Cluny died out during World War II.

Euan Macpherson, a trustee of the Clan Macpherson Museum, has put together a new exhibition that features the portrait of Eliza Gordon Macpherson.

He said: "She was discovered 10 years ago in a cupboard at the top of Cluny Castle.

"It had lain there undiscovered for over 100 years, long before the residents at the time lived there."

Mr Macpherson said the painting was found in a very bad condition, with holes in the canvas, fire blisters and smudges.

He said: "We didn't know who the lady was until recently.

"But it is now fully restored and the writing underneath showed that it been completed by Sir John Watson Gordon, a very distinctive artist in the 19th Century."