A message from Sid Griffin about middle-aged people in shorts... just kiddin'...‏ 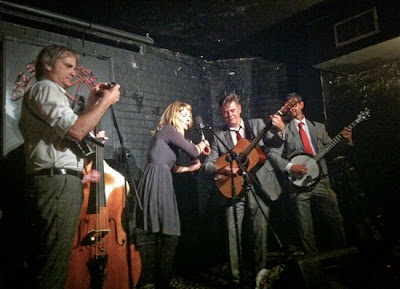 I am again on Radcliffe & Maconie's fine BBC 6 Music radio show, the date and time Thursday May 10 about 2:30pm GMT. I hope you can tune in via your wireless or on your computer at work or at home. I will be speaking about the George Harrison release, Early Takes Vol. One.

The Coal Porters play Poland for the first time on Sat May 12 at the Kody Festival in Lubin. If any of you have Polish friends, and who doesn't, please tell them to check out the Coal Porters late night set there Saturday night. This will be the FIRST EVER GIG not just for Poland but for new bass player Tali Trow.

We play Scotland shortly thereafter, details as ever on the Tour Dates page of the Sid Griffin Dot Com website. The gigs are:
May 15 Tues in Leith, Edinburgh at the Leith Folk Club
Wed May 16 & Thurs May 17 in Kinross & Fife performing for our old pal David Mundell at his new hotel  (that rhymes...cool...)
Fri May 18 we play Midlem Village Hall near Selkirk...get your tickets NOW as it always sells out
Sat May 19 we play Glasgow again for our old pal Alan Hendry
Details of each show at Sid Griffin Dot Com's neat and informative "Tour Pages"
OR you can check out the gigs by Googling  "SonicBids Coal Porters"  as that works too.

We have finished recording our new album, John Wood did a fine job. The tracks, as we in the biz like to call the recorded songs, are being mixed by myself and Ed Stasium right now and the idea is to have them done and dusted by early summer so we can release the album in September. It is to be called Find The One and it is the best album the Coal Porters have ever made. I solemnly promise you folks that, the best album we have ever made.

If anyone has a gig for us in the first week of June let me know! There are not too many dates this summer as one of our band is getting wed and going on a lengthy honeymoon and of course because there is little reason to tour tour tour until the record is out in September but we will be around so please come out perform and see us and say hello.