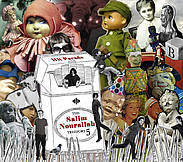 Salim Nourallah - Hit Parade (Tapete Records)
Salim Nourallah’s “Hit Parade” is of the most refreshing US indie singer/songwriter records I‘ve heard this year, and that's a fact. Illinois born, Texas based, and backed by his own five-piece band, this reminds me of those albums Ryan Adams used to make, with full on bravado and daring do, which had you rocking in the aisles. Yes, it really is that good.

The album begins with the gently intimate "38 Rue De Sevigne", and it nibbles away at your psyche, declares it a suitable location for love, when the pace suddenly picks up, and you’re immediately whisked up into an indie rock maelstrom. It’s followed by "Unstoppable", which jangles away merrily, and thus into your consciousness, before "Channel 5" finds its way onto your favourites list.

The title track comes next, and it’s a magnificent set of words put to a tune that’s slow and heavy, rock solid rock 'n’ roll. It grips you hard, and makes you breathe a little slower and deeper, it’s pulse aligning with your own, as if conveying the very life force needed to continue on this planet; a truly spectacular track.

It doesn't get any better on the remaining ten tracks, but it hardly gets worse. This is prime rock music, from an artist at his peak. If you buy only a few albums in a year, then this has to be on your 2012 list of essential purchases.
www.salimnourallah.com
www.tapeterecords.de
Kev A.