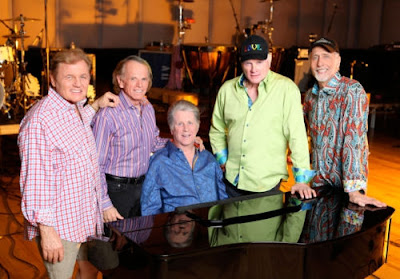 The surviving members of The Beach Boys are to visit the UK as part of their reunion tour.

The band have announced one UK concert so far, to be held at London's Wembley Arena on 28 September.

The Beach Boys' 50th anniversary world tour, which began in Arizona in April, marks the first time Brian Wilson has toured with the group since the 1960s.

Songs including Good Vibrations and Surfin' USA made them one of the most influential acts in pop and rock.

Wilson is touring with fellow founding members Mike Love and Al Jardine. Bruce Johnston and David Marks, who have been associated with the group for decades, are also in the line-up.

Wilson's brothers Dennis and Carl, who were among the original members, died in 1983 and 1998 respectively.

The band helped set the mould for modern pop and their 1966 album Pet Sounds is regularly cited as one of the greatest LPs ever.

But their success waned as Wilson succumbed to psychological problems and drug use, while tensions led to a succession of legal wrangles within the band.

Tickets for the Wembley show go on sale on Friday, Their new album, That's Why God Made the Radio, is out on 4 June.

They are touring in the US and Canada until July, when they move to Europe, Japan and Singapore.