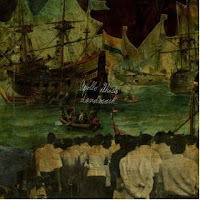 There’s much to be said for pure enthusiasm; especially when wedded to huge sing-a-long choruses, proper tunes and hooks you can catch elephants with. Not that I would; it sounds cruel. Canada’s Apollo Ghosts do all that and more as they tap into the legacy of The Modern Lovers, and shambolic pop punk heroes The Television Personalities, to produce an album that does most things right.

Beginning with the short and sweet “What Are Your Influences?”, I think that question was answered in the first paragraph, but if it’s not too late I’d like to add a bunch of C86ers such as The Primitives and Shop Assistants, though there’s no mistaking their North American heritage. “American Joint” and “I’m In Love With The USA” might be steeped in irony, or perhaps the latter’s utterly joyful mix of The Ramones, Velvet Underground and The Beach Boys is heartfelt and sincere. Whatever, I know what I’ll be whistling in the shower.
www.facebook.com/ApolloGhosts
Simon M.