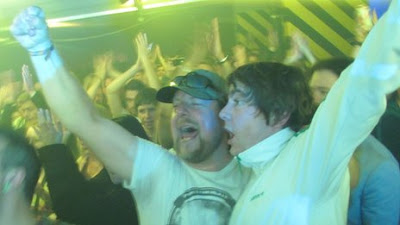 Manchester's famous Hacienda nightclub has been revived for a one-off party to celebrate its 30th anniversary.

Ageing ravers attended the event in an underground car park on the site of the venue, which was demolished in 2002.

The club became legendary for its place at the heart of the acid house scene in the late 1980s and '90s - as well as for its drug dealing and gang violence.

The anniversary attempted to recreate the euphoric atmosphere of its heyday with sets from classic Hacienda DJs including 808 State, Dave Haslam, Graeme Park and Jon DaSilva.

Steve Oldroyd used to travel from Harrogate to the venue every Saturday night. Now 45 and a telecommunications engineer, he said: "There's never been anywhere like the Hacienda.

"Everybody just seemed to be on the same wavelength. So it's quite nice to be part of something like this tonight."

Friend Steve Wallace, a 39-year-old commercial director, recalled the atmosphere that made it famous. "If you came in a bit later, you'd walk into a wall of sound and smoke and heat," he said. "You could feel it throbbing. There really is nothing like it.

"I talk to my girlfriend about it and she looks at me like I'm from a different planet but she was never here. The people that weren't here, who hear us oldies going on about it all the time, they don't get it.

"It was unique and special. It's quite nice to be back. It's not quite the same, but it's a good second." 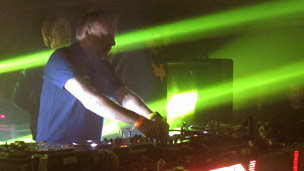 The Hacienda opened on 21 May 1982 and was run by the Factory Records label and New Order.

As well as hosting acid house club nights, it also saw gigs by seminal bands including New Order, The Smiths, The Stone Roses and the Happy Mondays.

The club's feelgood heyday was famously fuelled by ecstasy - which led to drug rivalries, violence and eventually closure in 1997.

A block of flats was built in its place and the anniversary party took place in the block's car park. It finished at midnight to avoid overly disturbing residents.

Peter Hook, who played bass with Joy Division and New Order, said: "The idea came about to celebrate the 30th simply because Graeme Park and I thought that we might not be here for the 40th.

The Hacienda was also famous for its financial mismanagement and Hook has claimed it lost his band £18m.

"We're even managing to lose a fortune on the 30th anniversary party - because it's for charity," he said. "I suppose this is our way of having a party and giving something back."

With a 500-strong crowd, the night raised money for Nordoff Robbins music therapy.

Hook said the party was "the icing on the cake" in a summer when The Stone Roses, Happy Mondays and his estranged New Order bandmates - dubbed "New Odour" by the bassist - are back on tour.

Hook himself is playing Joy Division's albums Unknown Pleasures and Closer on tour with his band The Light. Two more Hacienda anniversary events are being held at the Sankeys nightclub on 2 and 4 June.