New Book, Too High To Die: Meet The Meat Puppets... 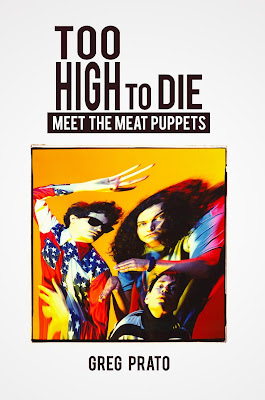 For the first time ever, the Meat Puppets' story will be told in book form, when the authorized band bio, Too High to Die: Meet the Meat Puppets, is released on June 1, 2011. Journalist/book author/long-time Puppets fan Greg Prato wrote the book with full cooperation from the band.

Set up in an "oral history format," the book is comprised entirely of never before published interviews, which were conducted solely for this book. Also included are 15 rarely seen and/or never-before-published photos of the band from throughout the years. All eras of the band are covered, including the writing/recording of such classic albums as 'Meat Puppets II' and 'Up on the Sun,' the group's appearance on Nirvana's classic 'MTV Unplugged' episode, the story behind their breakthrough hit single "Backwater," and how the Kirkwood brothers reunited in 2006, after being apart for nearly a decade.

As the group's singer/guitarist/songwriter Curt Kirkwood says on the book's back cover, "It's a very strange, wonderful experience to read...I love the way it flows...a linear time capsule compendium of the band's past...so many perspectives tied together so well. I feel like I've been hanging out in these scenes just yesterday. Folks I know well and folks I've never even met giving me insights and perspectives on the band and myself that I've never considered or been aware of. Eerie and fun to find myself so captivated reading about something that has held me captive for my entire adult life...sometimes it's hard to see the forest for the trees. This is giving me a glimpse of the forest...thanks for the bitchin' experience."

The book will be priced at $24.99 and made available for sale via Lulu.com on June 1, with a pre-order currently set up via the Meat Puppets official website.

For pre-order info (and for more information about the Meat Puppets), visit www.themeatpuppets.com.

To schedule an interview with the band or to request a review copy of Too High to Die: Meet the Meat Puppets, contact Clint Weiler.

Later this summer, look for Meat Puppets to bring their pioneering legacy into the interactive world, as the band helps launch a new interactive music app called JamBandit. Fans will be able to experience Meat Puppets as never before, feeling the rush of genuinely playing in realtime with Cris, Curt, Ted, and Shandon, regardless of musical ability or training. To sign up for a sneak peek, visit www.jambandit.com.