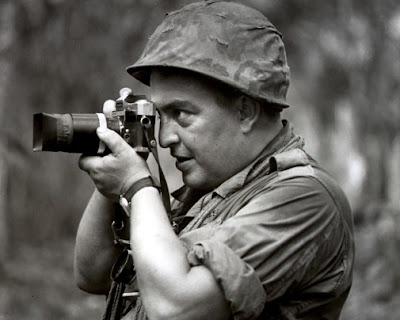 Celebrated combat photographer Horst Faas, who covered the Vietnam War for the Associated Press, has died aged 79, his daughter says.

Germany-born Faas won four major photo prizes, including two Pulitzers, during his career, and served as AP's Saigon photo chief at the height of the war.

In Saigon he trained and mentored young Vietnamese photographers who captured many of the war's defining images.

Faas was injured in 1967 and later used a wheelchair for many years.

He died after suffering years of health problems, including paralysis from the waist down.

"Horst Faas was a giant in the world of photojournalism whose extraordinary commitment to telling difficult stories was unique and remarkable," said Santiago Lyon, AP's global head of photography.

"He was an exceptional talent both behind the camera and editing the work of others and even in the grimmest circumstances he always made sure to live life to the fullest," Lyon said.

"He will be sorely missed by scores of colleagues, especially that reduced group with whom he covered conflict, particularly the Vietnam generation."

Speaking to the BBC in 2007, Faas described his job in simple terms.

"I tried to be in the newspapers every day, to beat the opposition with better photos. I didn't try to do anything grandiose. The photos were used and published and asked for, because Vietnam was on the front pages year after year after.

"I lived from day to day, from event to event. It was a perfect story for an agency photographer."

He began his career covering conflicts in 1960, four years after joining the Associated Press (AP).

He worked in what was then Zaire, and in Algeria, before relocating to Vietnam, where he won his first Pulitzer Prize in 1965.

Accepting the award, he said he aimed to "record the suffering, the emotions and the sacrifices of both Americans and Vietnamese in... this little bloodstained country so far away," AP said.

He had a front row view of much of that suffering.

When not in the midst of the conflict, Faas worked at AP's Saigon base, viewing and selecting images from his photographers to transmit on the wire to the rest of the world.

Under his direction, AP photographers captured images that quickly became synonymous with the long war: among the most notable were Eddie Adams' image of the execution of a Viet Cong suspect and Nick Ut's picture of a naked Vietnamese girl fleeing a napalm attack.

"I don't think anyone stayed longer, took more risks or showed greater devotion to his work and his colleagues," said New York Times journalist David Halberstam, who once lived with Haas.

"I think of him as nothing less than a genius."