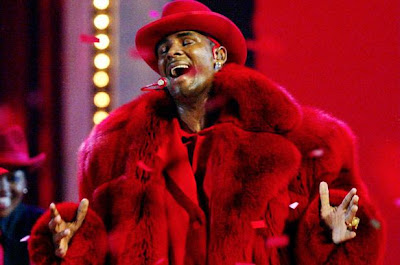 If you'd paid for tickets to a special 'Mother's Day Weekend' R Kelly show in a Texas strip club, what would be the least you'd expect?
This is a question people who attended such a show on Saturday (Mother's Day in the US) had to consider before paying for tickets. Do you take a punt and pay the general admission price of $30, or do you assume that it's going to be so good that it'll be worth forking out for one of the VIP packages costing between $60 and $550? Information about what each package offered seems to have been a bit vague. And I think it's also fair to say that, regardless of what they paid, most people left disappointed.
Billed as "an intimate night with R Kelly", fans who attended had to wait until nearly 1am for the singer to take to the stage. At this point, he sang over a CD playing his hit 'Ignition (Remix)', and left the stage again, only to return briefly to inform the crowd that if some attractive women didn't come and join him in the VIP area forthwith, he was "going to be up out this bitch", according to The Austinist.
As this point, the DJ for the night, who was clearly expecting more from the star too, began rallying the angry crowd, before the promoter came on stage to inform them that this was a "celebrity-hosted" party and that they were silly to expect R Kelly to perform a full show in a small club for $30 a pop. Which is true, though the promoter might still have made that clear at some point before the night began.
Still, it seems that word got back to Kelly that some people weren't happy. So, half an hour later he returned to the stage. Not to sing, but, according to Austin Music Source, to admonish them for being so ungrateful, telling the crowd that he "wasn't contractually obligated to sing" and that he had only done so previously as "a favour".
Eventbrite, whose ticketing system the promoter used for the night, has said that it will offer refunds to anyone who felt short-changed.
You can enjoy the unique atmosphere of the night for yourself via this video: www.youtube.com/watch?v=VYaeag2d9h4
Pilfered from: www.unlimitedmedia.co.uk
Posted by Bangs at 5/16/2012 11:45:00 am