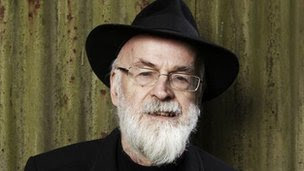 British author Sir Terry Pratchett is to have a pig named in his honour after winning the 13th Bollinger Everyman Wodehouse Prize for Comic Fiction.

He won for his 50th book Snuff, which has become one of the fastest-selling hardback novels since records began.

It is the first time the 64-year-old has been chosen by judges, having missed out on three previous occasions.

The award is given annually to the book considered by the panel to best capture the comic spirit of PG Wodehouse.

Hay festival director Peter Florence, one of the judges, described Sir Terry as a "consistently funny [and] inventive [writer] with an acute, satirical view of the world".

The Discworld creator will be honoured at the Hay Festival on 6 June, where he will also speak about his life and work.

As part of his prize, a Gloucestershire Old Spot pig will be named after his novel.