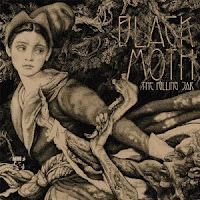 You know what I like about Black Moth? They take the sludgy riffs of Sabbath and Soundgarden, and they breathe new life into them with a combination of dexterous urgency and lithe arrangements. Often on “The Killing Jar” they sound like a band in a hurry, which is ironic, because they’re in a good place right now.

Produced by Bad Seed Jim Sclavunos (Wire magazine called him an “infamous elegant degenerate”), he’s managed to instill approachability into the band’s sound, a characteristic that so many alt. heavy rockers usually ignore. Opening cut “The Articulate Dead” is a case in point; it’s fast and hard, but singer Harriet Bevan sounds positively animated so high in the mix, allowing the guys in the band to thrash away without drowning either the hooks or the words. It’s a winning arrangement, and one they repeat a number of times with no sign of diminishing returns. Even at their heaviest, on tracks like “Blackbirds Fall” or the muddy psychedelics of “Plastic Blaze”, they retain an openness that is admirable. They’re mainly playing Yorkshire venues at present, but it can only be a matter of time before they show up at your local fleapit venue. Try not to miss them.
www.facebook.com/themothpit
Simon M.