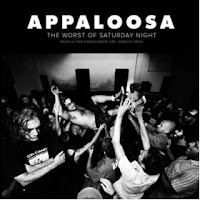 Italian band, Appaloosa, have been around the block a few times, and their recording career is well established, but despite this they’re completely new to me. Having now discovered them, my first words of advice to any other newbies out there are: keep an open mind. Once it begins there’s a thrilling menace in evidence, and complete changes of direction within minutes, and sometimes within tracks, that can be unsettling.

The somewhat repetitive dance beats that are prolific throughout (though subjugated on occasion, broken up by electronic pulses and keyboard phrases, as on "Western"), can sometimes be found alongside an array of sampled sounds. They include spoken pieces, which is the closest we get to conventional vocals, apart from what appears to be Middle Eastern female 'trilling', or on "Calibru", just a repeated three word phrase “It's over now”, and on "Mazzpower" a mix of the two. Fixing on a particular genre is not a reality. For instance, when one of these sounds is a tooting 'flute' it gives a medieval tinge to the track ("Irish"), whilst the beats play out the dance marathon they instigated here and elsewhere. The tracks vary in length from less than half a minute to over five, which is also a little unsettling, especially as the genres involved are melded together in such a way that trying to unravel them is nigh on impossible. Did I really identify a little bit of Yes and King Crimson in amongst the melee? I may have imagined early Yes on "Western", but the following "Yuri" appears to be based firmly in the percussion and rhythms of King Crimson.

This isn’t for everyone. Avant garde rock, feet rooted firmly in electronic experimentation, is rarely going to satisfy anyone outside of lovers of the genre, or more accurately, lovers of the variety of elements on show here. Still, I might be one such convert, and that’s a big surprise, believe me.
www.facebook.com/Black-Candy-records
Kev A.