Reanimation - Giants Hide Among Us (Independent) 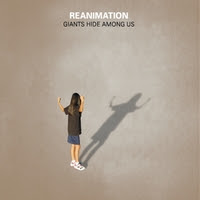 This has been a long time coming. The ingredients have been blending and fermenting since 2006, with roots that stretch back even further, apparently. In fact, Reanimation is just a one-man show (Michael Shanahan), and his vision, which takes in so many genres; his musical scope reaches from the deep rock mines of post rock to the psychedelic space station way up there above the clouds, with ledges and shelves of sound in between, that support elements of avant-garde, prog, experimental, shoegaze, and both indie and straight ahead rock. Sure, there may be more labels we need to attribute to this music, but that’ll have to do for now.

The instrumentation has a base in more than one camp too, with synths, acoustic guitar, multilayered electric guitar and, I suppose, anything 'that makes a noise and fits'. Three of these tracks are instrumentals, and voices, in both monologue and song, add their own clutter to the other five tunes, making it a package of almost perfect musical delight. There’s so much going on in every track, if it weren't for the long view and Shanahan’s foresight, it could’ve been messy, but it’s not. It’s well formed and sparkles, with a hypnotic groove that changes with each track. Think Bevis Frond for some of this, but less guitar-centric, and even further out there.
www.facebook.com/reanimationtheband
Kev A.